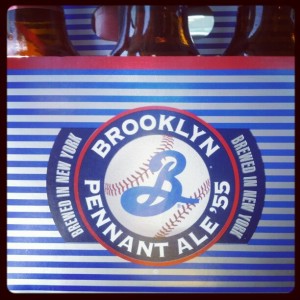 Price: $7.99 (6-pack)
Their Take: As Brooklynites, we revere the memory of the 1955 World Champion Dodgers baseball team, so we had to name a beer in their honor. Brooklyn Pennant Ale is a honey-colored pale ale with a brisk malt palate and finely balanced hop character. Pennant is a traditional English-style pale ale…Brooklyn Pennant Ale is brewed from Scottish Maris Otter malt, which is justly prized for its toasty, biscuity flavor and the round smoothness it imparts to beer. Our house ale yeast brings out an appetizing fruitiness and ferments to a dry finish.

My Thoughts
I picked up this beer before heading to a Phillies game solely on Brooklyn Brewery’s reputation and the fact that it was a baseball related beer, obviously named after the Brooklyn Dodgers’ only World Series win while in New York. That being said, I don’t know that I would pick this brew for tailgating in the summer. Lucky for me the tailgate session was on the chillier side and the beer was rather enjoyable. The beer poured a light brown or copper color, with a small head on it. It was very smooth and relatively sweet, and the malt gave off a caramel flavor, really shining through in the Pennant Ale. A solid overall beer, but nothing spectacular. I wouldn’t have one through an all day grill session in July, but on a nice spring or fall day it’ll do well for you.

This entry was posted on May 3, 2012 by dasalehaus in Brew Review, Brews and tagged beer, brew, brew review, brooklyn brewery, pennant ale, review.