Though I may have stopped writing, Das Ale Haus has not stopped brewing. For a variety of reasons (mainly my second job

and winter laziness), I haven’t updated since my double brew post of my Gary and Franklin beers. The Gary Pale Ale was a good beer, nothing spectacular, just solid. The Franklin IPA, on the other hand, was awesome. It’s the first beer that I wanted other people to try. I’ve since made two batches of it. Both used only Centennial hops, but the first was brewed with extract and specialty grains, while my second batch was my first all grain batch. Yup, I’ve made it to all grain brewing now.

Before we get to all grain (and one no grain), I’ll run through the beers I made since my last post. For one of them, when I was looking to get rid of some ingredients, I took everything I had and brewed it into one beer. That turned out…alright. It’s drinkable, but that’s really all I can say about it. I’m looking to clear some room in my 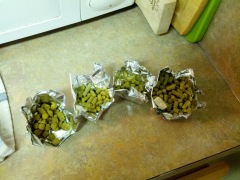 storage right now, and I’ll probably be dumping that one. I also made an oatmeal stout with cinnamon and maple syrup which tasted awesome all the way up to bottling. I had such high hopes, but then it ended up being way too watery for a stout, and reminded me of a light beer that just happened to be stout colored. That one may be going down the drain with my grab bag ale.

One of the beers I made, which turned out really well, was a gluten free beer for my sister who has celiac disease. It was a difficult, yet really fun beer to brew. I’ll write up a separate post for this one, as I think it’s something a lot of people are curious about, but in the end it ended up not poisoning her. So that’s a good thing. It was brewed with sorghum, rice, and quinoa, and

came out really tasting like a beer. That’s impressive in the gluten free world.

My first all grain batch will also be getting its own post, as I’ve finally moved beyond extract, but I decided to make my successful Franklin IPA as my test batch. I went with a stove top Brew in a Bag (BIAB) approach taken from Homebrew Talk, as it was the most logical for my current apartment set up. It’s a whole different ballgame doing a full mash and boil, but it was worth it. This beer came out awesome.

As for the reviewing, I’ve been moving deeper and deeper into craft beer, starting to pick up single bottles and rarer brews, arrange for trades, and really just develop my palate. I’ve been keeping notes on my favorite ones, and writing them up periodically, while posting on Untappd very regularly. I kept them as drafts until I’m able to commitmore time here, so posts are in the pipeline. As we move into spring, I’ll be able to commit more time to the site, and I’m looking into forward to being able to share my experiences with the people who may stumble by this site. For now, just enjoy the beer porn I’ve racked up through the past months.

This entry was posted on March 1, 2013 by dasalehaus in Brew News and tagged catching up, craft beer, gluten free, homebrewing.