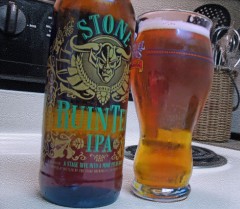 Brewery: Stone
Brew: RuinTen IPA
ABV: 10.8%
IBUs: 110
Their Take: We first released this decidedly indelicate beer in 2012, as Stone Ruination Tenth Anniversary IPA, to celebrate the 10th anniversary of our belovedly bitter Stone Ruination IPA. Stone RuinTen IPA uses the same recklessly hoppy recipe as the 2012 release; only the name has changed, as we plan to unleash this belligerently delicious hop monster upon the public annually from now on. We packed a whopping five pounds of hops into each barrel, and cranked up the ABV to stand up to the hop onslaught. The results are glorious, and we know you’ll rejoice in tasting this audacious gem of hoppy splendor once again. You’re welcome.

Once again, Stone is out with one hell of a hopbomb, and once again, I’m not complaining. RuinTen is a rerelease of last year’s 10th anniversary Ruination beer, where they just jacked up the hop schedule of an already deliciously bitter beer. And since I grab pretty much anything Stone releases as soon as it hits the shelves, I had to get one of these.

RuinTen pours a pretty, clear, copper with a thin, off white head. The color was like looking into a burning fire, and the woodsy aroma of the hops reminds me of a bonfire in a glass. Along with the piney scent, there was some citrus to be detected, though not a whole lot like with Stone’s other heavy duty IPAs. The taste was of heavy malt, slightly sweet, which honestly was needed to pull off a beer with the strong hop punch found in RuinTen. The flavor had a whole lot of what you would expect from the aroma – strong woodsy flavors, with a slight bit of grapefruity citrus. It was definitely dominated by the pine to me, more so than the citrus normally associated with a Stone release.

The really interesting part of this beer has been the evolution over a couple weeks in the taste. When I first tried this beer, it was just a little over a week since bottling, and to be honest was very hot. Between the bitterness and the alcohol, it came off as very boozy, kind of disappointing after seeing what Stone was able to pull off with the Enjoy By series. Very quickly it settled down though, and just a couple weeks later (I had a few bottles) that burn was gone and this beer was as smooth as could be, and the citrus part of it came though much more. The massive malt profile I mentioned early was able to easily balance out the hops, and once it all mellowed and meshed together, the beer has been absolutely phenomenal. I wouldn’t let it sit much longer, but it did need more time than I initially gave it. I’ll definitely be looking forward to this release again next year.