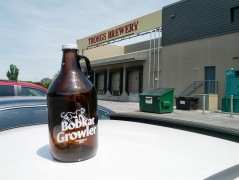 The Tröegs brewery is an industrial place, large and open with room for a rather large brewery, full shop, and bar with a snack stand. They offer guided group tours, but as I was just stopping in on my way home I opted for the self guided tour, which consisted of me wandering around in awe at the magnitude of brewing going on there. They made it really easy for the loner tourist, clearly labeling everything as though the place were an exhibit rather than an actual brewery. It was pretty cool to see the access they gave – everything was behind plexiglass, even the lab where they develop and maintain their yeast strains. The one thing that really struck me was how clean the place felt. A brewery should be clean, obviously, but Tröegs felt almost institutional in its cleanliness. If there was any mess from packaging or fermenting, they hid it well. 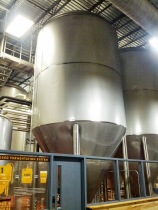 After going through their line, staring at fermenters and bottling stations, checking out the barrel room (I honestly didn’t know they had a barrel program), and taking some photos, I headed out to the bar area for a quick beverage and some of their flavored popcorn. While the popcorn was great, unfortunately for me they had just ran out of their latest scratch series, which is brewery only, and just had their standard line up on tap. I went with a Troegenator, their flagship double bock. It was the only one I hadn’t yet had, and it didn’t disappoint. Dark, yet smooth and crisp, with nice roasty notes to round it out. I then took home a growler of their Pale Ale, fresh as could be.

Here’s the thing about Tröegs – for some reason I had something against them for the longest time. I’m not exactly sure why, as Dreamweaver was one of the very first beers I had that introduced me to the world of craft beer my senior year of college. Maybe I just took them for granted since their beer was always so readily available being so close, and I figured I could always get one of their beers next time around. I’ve definitely changed my attitude towards them now, however, and I think Nugget Nectar started that this past year. I started giving their whole line another shot, and honestly they’re just putting out consistently great beer. Sunshine Pils was one of the best lighter beers I had this summer, and Hopback is a great take on an amber with a little bite to it. And of course there’s Nugget Nectar, one of my personal favorite beers. I just wish I could have tried something out of their scratch series, because I’m sure they’re doing great things with that. I guess there’s always next time.