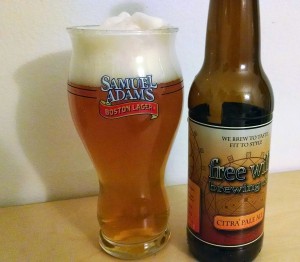 Free Will Brewing is a relatively young brewery out of Perkasie, PA, having just opened their doors in January of 2012. This is my first experience with them, and I went with their Citra Pale Ale, because, well, Citra. Who really needs another reason? It’s a damn fine hop.

Citra Pale Ale started off with a whole lot of…nothing. Here’s where I mention that there was no date on the bottle, so the beer I was drinking may have been a bit older than it should have been. I have no way to tell if this is the case, but it would really explain the lack of any hop aroma on a pale ale, something that shouldn’t be happening. The faint scent I did get smelled more like lemon Pledge, so that didn’t help the cause.

Another sign pointing to the beer being a bit older was the pour. The head on this was super fluffy and thick, but it was definitely overcarbonated, like it had bottle conditioned too long. No matter how slowly I poured or how I held the glass the thing foamed up like a bubble bath. The head on it was a pure white, blending in with the primer still on my walls, sitting on top of a hazy orange that had a constant flow of bubble streaming from the bottom of the glass. Other than the head being outrageous, it looked delicious.

However, the taste was another thing that kind of caught me off guard about the beer. This may be due to the possibility of this one being an older bottle, but I was getting a whole lot more biscuity and bready taste to it. Citra Pale Ale came across more as an English Pale Ale than an American, especially with the hop presence once again being nearly non existent. This wasn’t a bad thing at all, just threw me off for the first few drinks. The carbonation was front and center for a bit, giving it a somewhat prickly mouthfeel, but that went away once the beer settled down. Towards the end of a sip there was a grapefruit bitterness reminding me that it was, in fact, an APA, but for the most part it struck a more English tone.

I know from this it sounds like I didn’t like Free Will’s Citra Pale Ale at all, but that’s not true. In fact, I rather enjoyed it, and when I tallied up the points I gave it I was shocked to see it so low. Certainly it’s not a stand out beer, but by the end I found myself wondering what else Free Will offered while wanting another of this very easy drinking pale ale. There’s not a whole lot going on to confuse the palate here; it’s a beer for drinking not for thinking.

This entry was posted on November 25, 2013 by dasalehaus in Brew Review and tagged brew review, citra pale ale, craft beer, free will brewing.