A Taste of Israel

Golan Heights’ main focus is wine, but they’re using their fermenting abilities for beer as well.

Over the summer my lovely fiancée (and the Das in Das Ale Haus) went to Israel for a couple weeks. During the trip the group visited a brewery, and being the awesome person that she is she brought me beer back from the Holy Land. While we probably waited a bit too long to drink these beers, in early January (oops, I swear I wrote this back then) we decided to crack open all three and see what’s brewing over in Israel.

These beers came from Golan Brewery located in Katzrin in Golan Heights. The brewery was founded by Naftali Pinchevsky and Haim Ohayon in 2006, and won Best Israeli Brewery at the 2011 BIRA competition. The brewery works closely with the Golan Heights Winery, a joint venture which allowed the brewery to produce more beer of a higher quality. As of 2012, Golan Brewery produces the equivalent of roughly 1,100 bbl and was ranked seventh on a list of Israels top ten microbreweries.

So, how were the beers? Though not as fresh as they could have been (again, my own fault), they were still pretty good, and definitely better than I was expecting. All three that we tried were definitely influenced by German brewing and had more malty flavors compared to their American counterparts. Let’s break them down, beer by beer.

Beer: OG Pale Ale (עוג פייל)
ABV: 4.8%
First up, we had the Golan Brewery OG Pale Ale, a seasonal beer and the front one in the photo. It poured a cloudy orange hue, clearly bottle conditioned which lead to a huge, fluffy white head. The aroma was of bread and biscuits, rather than the typical floral hops that I’m used to from a pale ale. There was a very slight citrus hint in there, but it faded quickly and was overwhelmed by the yeastier smells. On the tongue it was very bubbly, probably from sitting in the bottle for so long, almost to a seltzer level of carbonation. The yeasty, bready flavors dominated any chance that hops may have had, but this could have been from sitting for a while. It was thin and very drinkable, which is great for a low ABV summer release. This pale ale was the best of the bunch to me. 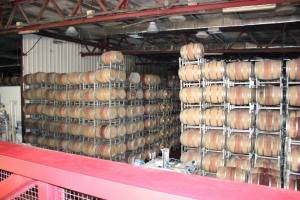 If Golan Heights ever wanted to start a barrel program they’d be set.

Beer: Bazelet Wheat (בזלת-חיטה)
ABV:  5.1%
Next we moved on to the Bazelet Wheat, a hefeweizen. Bazelet Wheat was a cloudy beer, as nearly all hefes are, light tan with almost no head. After the first pour I was expecting a massive head typical of a wheat beer, but there was none to be found here. It smelled of bananas, but more like banana Runts candy than the typical banana esters. Almost as though they had to pump up the aroma and flavor of it artificially. The massive banana aroma was almost no where to be found in the taste, however. There was a slight grassiness at the start of a sip, but the body was watery thin with only a fleeting taste of banana. From the look of it I guess I was hoping for more Weihenstephaner, but that’s an impossibly high standard. Again, for a summer beer it was very drinkable, but I think that was owed more to the thinness of the beer. Definitely not bad, but not great either.

Beer: Bazelet Ale (בזלת-אייל ענברי)
ABV: 6.4%
We finished our tour with Bazelet Ale, an amber ale. By this time, we’ve realized that all of the beers from Golan are unfiltered, as this poured a couldy, burnt orange that bordered on brown. I guess you would say that it poured, well, amber. It had a more bready, yeasty smell to it like the pale ale, but tossed in a bit of sweetness as well and unfortunately a bit of copper. It was very effervescent, yet still almost a bit syrupy thanks to the caramel sweetness. It was definitely heavier on the palate than the pale ale, though still carried a lot of the same flavor characteristics. There was that bready taste, both during and after, but the copper taste was there which I’m chalking up to oxidation. That can be placed on me for letting it sit, but looking past that it was another solid, if unspectacular, beer from Golan Brewery.

My world traveler, drinking wine and saving the beer for me.

Overall I wouldn’t say there was a bad beer of the bunch, but there also wasn’t an outstanding beer either. I must say, I went in to this with very low expectations, and all three beers exceeded what I though they’d be. So cheers to Golan Brewery for producing some quality brews, proving that no matter where you go in the world good beer can bring us together.