This is the fourth in a series of posts offering a word of advice to anyone new to craft beer. So far we’ve heard from Doug at Baltimore Bistros and Beer, Jake at Hipster Brewfus, and Oliver at Literature and Libation.

Anyone’s first foray into craft beer can be an intimidating thing. I remember going into my first liquor store that took craft seriously and being completely overwhelmed by the selection they offered. Shelves lined with bombers and six packs, an entire aisle dedicated to their mix-a-six selection, more beer than I would have ever thought existed. I’m pretty sure I ended up taking home a pack of Sierra Nevada Pale Ale just because I had no idea where to start. Hell, I still have no idea what I want when I go to the store most of the time. So, with myriad beer choices available, how does one know where to start? You don’t. So drink up. 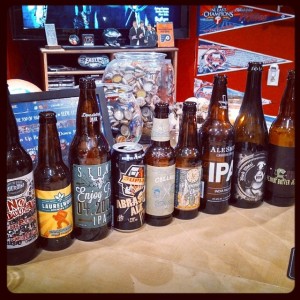 Line ’em up and knock ’em back.

Sure, you can read Beer Advocate and Rate Beer reviews, trawl the internet for recommendations, or even just chat with a bartender, but the only way to really discover what beer you’ll like is to try it. Think you like IPAs? Have a few more, and expand your palate from there. Looking for something milder? Go for a wheat beer or amber ale. More into wine? See if saison is up your alley. Try something new every time you go out to get a good feel for what it is that your taste buds enjoy. Once you know what you enjoy, push those boundaries. You just may find a new favorite style. Are those wheat beers all starting to taste the same? Look for a Berliner Weisse to throw your mouth for a loop. Whatever you do, just keep drinking. Within reason, of course.

One last piece of related advice for you, new craft beer drinker. Don’t get frustrated. You’re going to run into some duds along the way; more than you should. You’re going to have certain styles that you just don’t like. You’re going to have hyped beers that really have no way to live up to the expectations that have been built for them. All of this is okay, a part of the process really. You can’t truly know what you do enjoy without finding out what you dislike as well. The yin to your beer yang. But don’t let those beers get in the way of the good stuff. Just keep drinking what you like, and trying what you have never seen before. As the old cliché goes, the best beer is always the one in your hand.

Next up in this series of advice for those new to craft beer is Bryan of This is Why I’m Drunk. Look for his post tomorrow.

What are some other words of advice? Check out theses posts to find out what my fellow Mid-Atlantic beer bloggers think:

Doug from Baltimore Bistros and Beer: Craft
Jake from Hipster Brewfus: Patience
Oliver from Literature and Libation: Reciprocate
Bryan from This Is Why I’m Drunk: Live
Josh from Short On Beer: Journey
Liz from Naptown Pint: Relax
Sean from Brewkeep: You