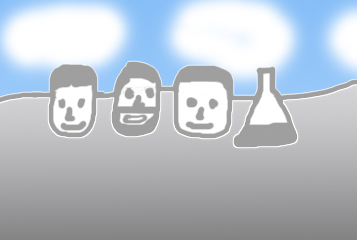 A recent discussion got me and a few other beer blogging doctors talking about who has had the greatest influence in our beer lives. It was interesting to see the names brought up, so we decided to flesh it out over something longer than a Facebook comment. Without further ado, I present to you my Mount Rushmore of beer.

Jim Koch – Growing up on the East coast, Jim Koch and Sam Adams undoubtedly had the biggest influence on my early craft beer life. Though Sam Adams’ influence may have waned now (much to Koch’s dismay), whenever we wanted a break from Keystone Light in college it was Boston Lager, Octoberfest, or Winter Lager that we reached for. Without these accessible beers – which are still good! – I may have never taken a look at beverages from smaller, local breweries like Flying Fish and Victory all those years ago.

Ken Grossman – Ken and Sierra Nevada may have come before Jim Koch and Sam Adams in the craft beer historical timeline, but they’re placing second here. When I was first getting into beer I’ll admit that Sierra Nevada Pale Ale wasn’t for me. Now that couldn’t be further from the truth – it’s a true classic. However, they didn’t just stop there and stubbornly remain stuck in their ways. Sierra Nevada and Ken Grossman have continued to evolve with the craft beer culture, and their last three releases (Hoppy Lager, Nooner Pilsner, and Hop Hunter) have all been on point as far as I’m concerned. Their Beer Camp is a fantastic idea, and they took it to the next level collaborating with 12 breweries last year. Sierra Nevada is an icon of the past and present, and Ken is someone I admire in both business and brewing.

Jimmy Carter – Regardless of your stance on politics, Jimmy Carter made one undeniably great decision for the future of beer back in 1979. With the passage of HR 1337 it became legal to brew up to 200 gallons of beer free of excise taxes for personal and family use. Months later the Brewers Association and American Homebrewers Association were founded, and thus began the slow rise of craft beer.

All that is great, but here’s why it pushes Carter into my personal top four. I liked beer before I started brewing, which shouldn’t surprise anyone. However, once I started brewing I truly began to appreciate beer. I gained first hand experience in the difficulties and nuances of brewing, and how hard it was to create a genuinely great tasting beer. There are innumerable variables to consider with each batch, and that’s just at the five gallon level. Brewing is very much an art form, and I don’t know if I’d have a full understanding of that had I not been able to brew at home.

Saccharomyces cerevisiae – Another lesson I’ve taken from homebrewing is that brewers can only do so much, namely create a sugary, hoppy soup. The rest is up to our yeasty boys, usually out of the S. cerevisiae family. It’s our job to keep them comfortable while they work, for without them there’d be no beer, and that’s just not a world I want to live in.

This post is part of multiple essays from Mid-Atlantic beer bloggers discussing those they believe should be remembered for all time thanks to the influence they’ve made on the beer drinking world.

Make sure to check out these posts, too: