It’s been awhile since I last posted about homebrewing, so I think it’s about time to catch up on my what’s been going on. I brewed plenty leading up to the move, but remember, every recipe below is set up for the stove top, 2 gallon, BIAB that I’ve been using. This weekend I did get to brew my first batch in the new place, a full blown 5 gallon brew, but that was an adventure deserving of its own post. Spoiler alert, it was a mess. I have adjusted what I think needs fixing, so hopefully this Sunday goes more smoothly. Anyway, here’s what was brewing, rather inefficiently, before then. 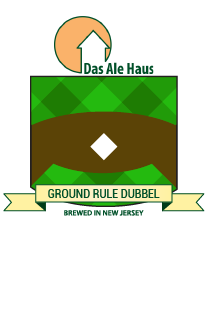 This was bottled with more homemade candi sugar and came out a deep, amber brown. Tasted pretty rough right off the bat, but after sitting for a couple months the flavors came together. I don’t think it’s necessarily a dubbel, but it’s still a pretty good beer. It also has the distinction of being the only beer in this group to get its own label, so Ground Rule Dubbel has that going for it.

This beer, a Belgian IPA (Indië Bleek Aal is a rough Dutch translation of India Pale Ale), was pitched on top of the yeast cake from the the dubbel that was brewed earlier. This was an experiment to see if it’d work, and it did! The IPA fermented down very low, and had the usual banana esters along with a nice hop touch. Turned out great.

Inspired by Three Floyds’ use of Citra hops in Zombie Dust, Brain Eater turned out to be an interesting, creamier IPA. I believe the mash ended up higher than the targeted 154°F, and along with a relatively high final gravity this lead to a thicker beer. It had a very earthy taste along with being a hop bomb, and while no where near as good as what Three Floyds offers I still enjoyed it.

Each brew keeps getting better, and with my first 5 gallon batch eventually getting into the fermenter I’m excited to see where it goes from here. I’ll even have extra to share now, so if you’re in the area and want to do a homebrew swap let me know!

3 comments on “Homebrew Review: Catching Up”